Ziggy, America’s loveable everyman, has become not just a classic but an iconic figure over the last 30 years. His gift cards have sold millions, and his comic is seen in more than 600 newspapers. All the latest color daily panels will be featured in this collection.

He's never had hair. Never owned shoes. Never even sported a pair of pants. No one would blame you for thinking that lovable everyperson Ziggy is broke. But there is one thing Ziggy does have--heart. And plenty of it, as cartoonist Tom Wilson reminds us in Ziggy Goes for Broke, a charming full-color collection of daily Ziggy comic strips.

In Ziggy Goes for Broke, the lovable Ziggy is back to take on our sometimes-indifferent world. As always, Ziggy is armed only with warm feelings, good intentions, and a homespun philosophy that reminds us that we're all in this together.

Ziggy Goes for Broke is a must-have for long-time fans and the perfect introduction for anyone new to the wonderful world of Ziggy. The fast-paced world might overlook somebody like Ziggy; he has no pants, no hair, and no luck. But that just makes everyone relate to him. And now everyone can walk in his shoes as much as they want with the fun Ziggy Hot Off the Presses collection.

You will find optimism, good intentions, and great get-through-life philosophies on every page.

Ziggy Hot Off the Presses In the great tradition of Ben Franklin, Roy Rogers, and Forrest Gump, Ziggy delivers his own homespun philosophy for more than 75 million devoted fans.

Tom Wilson's Ziggy often finds himself on the short end of the stick. Short on hair, short on pants, short on luck, and, well, at less than four feet tall, just plain short, this beloved comic Everyman never lets life's shortcomings get in the way of enjoying the company of friends, appreciating the beauty of a rainbow, or experiencing the best of what life has to offer.

In Ziggy Comes Up Short, which features more than 40 weeks' worth of strips, Ziggy reminds us that even though we may find ourselves short on hair, pants, luck, or height, we are never without the ability to change perspectives, wade through life's gunk, and conquer triumphantly.

Ziggy reminds us that even misadventure ends in adventure. More About Ziggy on Parade

For more than 35 years, Tom Wilson's Ziggy, syndicated by Universal Press Syndicate, has turned lemons into lemonade, rain into rainbows, and seemingly downhill experiences into character-building opportunities brimming with potential.

* Ziggy never forgets to remind us that even though we may find ourselves marching through life without hair, luck, or in Ziggy's case, pants, life's toughest challenges all have the potential for ending in celebration.

* Appearing in more than 600 papers Ziggy's daily exploits continue to mirror our own lives, while helping us positively reflect from within. In the great Parade of Life, Ziggy usually finds himself bringing up the rear . . . right behind the elephants! Yet, Ziggy marches on, showing us that every step of the way, life constantly places surprises in our path that we simply cannot afford to miss! 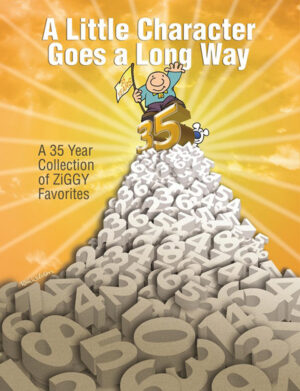 "Ziggy must be part of me, because he feels as if he's been with me all my life." --Tom Wilson

No matter where you are, no matter what's going on in your life, Ziggy has been there. For the past 35 years, readers around the world have picked up newspapers, opened greeting card envelopes, or caught sight of T-shirts and there's Ziggy, unfailingly showing how to appreciate life and find the silver lining in any cloud.

Tom Wilson's character--an admirable mix of Ben Franklin, Dale Carnegie, and Forrest Gump all rolled into a little bald icon--strikes a chord in everyone. And that's why so many will cherish A Little Character Goes a Long Way, a celebration of Ziggy himself. After all, it's the character of this character that's earned Ziggy such a special place in our hearts.

This treasury includes many classic Ziggy frames and strips, each highlighting the traits that make Ziggy the upbeat, hopeful, and unflappable optimist that he is. There's Ziggy generally making molehills and wrinkles out of life's highest mountains and lowest valleys; Ziggy and his menagerie of pets; and Ziggy taking the time to appreciate nature's beauty at its best. This little Everyperson reminds us all of what's really important, and this treasury will undoubtedly do the same. "Ziggy must be a part of me, because he feels as if he's been with me all my life.

Whether it's snowmen, turkey legs, Christmas trees, or shopping, you can bet Ziggy will have something to say about it. You can also depend on this little bit of Everyperson to spin out a homespun philosophy that leaves you smiling, shaking your head just a bit, and saying, "You know, he's got something there." That's what makes Tom Wilson's Ziggy a hit with the 75 million readers who see the panel in more than 600 Sunday and daily newspapers around the world. And it's what promises to make Ziggy's Gift a memorable way to celebrate the holidays.

Honoring the re-release of the movie Ziggy's Gift on DVD, this holiday-themed cartoon collection is the answer for any shopper looking for just the right combination of humor, warmth, and thoughtfulness. Ziggy is so approachable and easy to read, recipients won't be able to stop once they begin paging through the book.

This holiday season, Ziggy is bringing with him a Christmas gift that will capture and warm the hearts of everyone. Ziggy's instantly recognizable persona fosters a built-in confidence among buyers who feel they know the character and feel comfortable giving this collection as a gift. Ziggy and the holidays are made for each other! "When things go wrong and life throws you a curve, and some curves are a little larger than others, Ziggy handles it. He takes it on the chin and keeps on going." --Cincinnati Magazine

Ziggy has appeared in far more places than the newspapers that enthusiastically carry his visage. The lovable loser is taped to computers, pinned on office bulletin boards, and magnetized to refrigerator doors. He's carried in wallets, sent to friends and relatives, and stuck to bathroom mirrors. In a word, Ziggy is everywhere!

Such is the appeal of one of America's favorite pop icons. And Ziggy fans worldwide have the chance to see their old friend through the pages of The First 25 Years Are the Hardest! , a retrospective of some of Ziggy's best moments.

There's a confused little guy talking with his psychiatrist, ruminating at the bathroom mirror, and commiserating with his talking parrot. There's Ziggy at Mom's Diner, Ziggy addressing the heavens, and very often, Ziggy looking straight into the eye of his reader while dispensing such wisdom as, "Today is a first; That's why it's called 'The Present.'"

Ziggy speaks to everyone who's suffered a bad day, slipped up now and then, or spent time slogging through the rain showers of life. This book, commemorating Ziggy's 25th anniversary in the hearts and minds of the world, is filled with Tom Wilson's hand-picked favorite frames, those "you-can-say-that-again" triggers that always bring Ziggy fans back for more.

The First 25 Years Are the Hardest For the past thirty years, Ziggy and his band of merry friends have offered their daily dose of optimism to more than 75 million faithful readers who identify with the characters' hopes and insecurities. Ziggy, who relates better to his animal friends than he does to people, always manages to find the bright spot, inspiring us to do the same.In this special 30th anniversary edition, Ziggy's friends pay tribute to the quintessential little guy in a large world, the lovable character with the big head and the generous heart. Together they take a nostalgic stroll down memory lane, touching on their favorite times with Ziggy. Complete with a timeline documenting milestones in Zig's life, Ziggy's Friends for Life is a must-read for fans and collectors alike! "Cartoonist Tom Wilson's cartoon character speaks to everyone who's suffered a bad day, slipped up now and then, or spent time slogging through the rain showers of life."Ziggy has been taped to countless computers, tacked to thousands of school bulletin boards, and stuck on refrigerator doors everywhere. So it's only fitting that one of the planet's most popular cartoon characters pays a visit to the most famous community in the world-Hollywood.

Ziggy Goes Hollywood is the latest collection of cartoonist Tom Wilson's legendary strip. The pudgy and prized little guy first landed on comics pages in 1971. Three decades later he is read by 75 million people worldwide each day. While Ziggy may be insecure, he is a beacon of hope to the masses who read him daily: His humorous hard luck reminds them to not take life too seriously.

While things don't typically come easy for this adorable underdog, he always seeks out the bright spot, inspiring us all to do the same. Within its 128 pages, Ziggy Goes Hollywood captures dozens of those "you-can-say-that-again" moments that have made it legendary. Ziggy for 7/1/15. The standard 4-frame comic strip is enlarged to approximately 4 x 12 inches.  Sizes vary in accordance with the size of the comic itself, but all are printed, centered, on acid-free, archival 11 x 17-inch paper.