This dynamic graphic novel is based on the Big Nate animated series on Paramount+ and Nickelodeon, featuring storylines from animated shorts and full-length episodes. Starring Nate, Francis, Dee Dee, Teddy, and friends, these hilarious escapades will thrill longtime Big Nate fans as well as new readers. It's Big Nate like you've never seen him before! When it comes to making mischief, Nate Wright's in a class by himself. Whether he's pranking his sister with fluorescent toothpaste or giving the school yearbook an unauthorized glow-up, Nate's genius for trickery always earns straight As. Based on the hit Big Nate TV show on Paramount+ and Nickelodeon, Big Nate: Prank You Very Much features stories from two shorts and two complete episodes. In "The Pimple of Power," a honkin’ zit on Nate’s forehead unexpectedly becomes the most miraculous good luck charm in school history. In “Time Disruptors,” Nate and his pals channel a legendary team of superheroes to rescue Francis from the clutches of P.S. 38’s obnoxious archrival, Jefferson Middle School. Two short stories showcase Nate’s unmatched prank-pulling flair along with his hilarious response to a school picture day gone horribly wrong. Combining the animated series’s full-color artwork with the hand-drawnillustrations  so familiar to fans of Big Nate comics, Prank You Very Much packs a serious comic punch!

Big Nate: Prank You Very Much The newest collection of comics featuring Big Nate, who is now the star of a new animated TV series on Paramount+ and Nickelodeon. Nate Wright's life kind of stinks. His dad's habit of handing out healthy snacks ruins another Halloween. His frenemy Artur proves to be the world's worst football teammate. And how does Todd Dunfy have a girlfriend while Nate's still shockingly single? It isn't fair...but Nate doesn't sweat it.  Sidelined by a soccer injury, he tries his hand at coaching. After Chad gets stuck with a cheeky nickname, Nate decides to butt in. And when Gina takes over the student lounge, Nate puts his best foot forward. Sweet!  This brand-new collection of Big Nate comics is a breath of fresh air. So relax, kick your shoes off...and RELEASE THE HOUNDS! This dynamic graphic novel based on the new Big Nate animated series on Paramount+ and Nickelodeon includes stories from three different episodes, featuring visually stunning, full-color CG artwork. Starring Nate, Francis, Dee Dee, Teddy, and friends, these hilarious escapades will thrill longtime Big Nate fans as well as new readers. It's Big Nate like you've never seen him before! Sixth-grader Nate Wright believes he is AWESOME. At least that’s what he’ll tell you. Truth is, he has his doubts. But he’s not about to let the rest of the world know that. Instead, Nate finds himself constantly trying to prove how great he is to everyone around him. But there are many bumps on the road to Awesomeness, from his annoying sister, to his academic arch-nemesis, to his pure evil social studies teacher.Luckily, Nate is able to express himself through the world of cartoons that he creates. Cartoons are his super power. They express the way he feels and bring his overactive imagination to life. On the outside, Nate seems confident and sure of what he is doing, but his cartoons reveal who he truly is: a little uncertain, but very funny and always entertaining. Charming, mischievous, and a magnet for misadventure—trouble is always fun when Nate is around. Just ask his friends! Big Nate: Destined for Awesomeness includes stories from three episodes of the new animated series on Paramount+ and Nickelodeon. In "The Legend of the Gunting," Nate finds himself only one detention away from disappearance, according to an ominous P.S. 38 legend. In "Go Nate, It's Your Birthday," Nate's use of his father's credit card leads to all kinds of great adventures—and an epic race to recover from disaster. And in "CATastrophe," Nate finally gets a chance to spend time with his imagined true love, Jenny, only to wind up terrified of her pet. Featuring dazzling art from the TV series and all the charming characters of Lincoln Peirce's bestselling books, this new graphic novel series will delight both new and longtime fans of Big Nate. 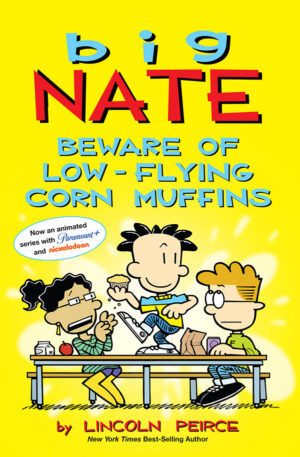 Soon to be an animated series from Nickelodeon!

The latest installment in the thrilling, bestselling Big Nate series by Lincoln Peirce.

Sixth-grade dynamo Nate Wright has all kinds of big plans and tricks up his sleeve, including writing a new hit children's book, trying to convince his dad to get him a new dog for Christmas, and helping his friend Chad score a new nickname at P.S. 38. Along the way, he encounters resistance from all the usual suspects, including Mrs. Godfrey, classmate Gina, and anyone skeptical of his plans to become an award-winning author. And as usual, things never quite turn out exactly like he planned. Join Nate and friends for another laugh-packed installment of Big Nate comic fun. Soon to be an animated series with Paramount+ and Nickelodeon!

The latest installment in the thrilling, bestselling Big Nate series by Lincoln Peirce.

Aloha can mean hello or goodbye—which makes it the perfect word for sixth grader Nate Wright. Why? Because Nate doesn't know whether he's coming or going. Will his romance with Daisy sizzle or fizzle? Will his hair survive Teddy's cut-rate barber skills? And when Nate spots a crime in progress at Klassic Komix, can he find his inner superhero? In this latest Big Nate collection, all your favorite characters are back with brand-new adventures: Sumo-grams, (almost) no-hitters, and even a sidewalk concert featuring Enslave The Mollusk. Say goodbye to boredom and hello to hilarity with Big Nate: Aloha! Soon to be an animated series with Paramount+ and Nickelodeon! A special Big Nate volume including all of the comics from Big Nate And Friends and Big Nate Makes The Grade.The adventurous antics of sixth grader Nate Wright are on full display in this special collection, which includes all the comics from classic titles Big Nate and Friends and Big Nate Makes the Grade. Joining Nate in the fun at P.S. 38 are his best pals, Francis and Teddy. Whether he's setting the school record for detentions, earning an A for annoying teacher's pet Gina, or inventing new ways to trash talk during a chess tournament, Nate's talent for making mischief is second to none. Like a sudden soccer ball to the gut, the thrilling next installment in the enormously popular Big Nate series will take your breath away! When you're a sixth-grade dynamo like Nate Wright, life comes at you fast. Whether it's a soccer ball to the head or another teacher tirade, surprises lurk around every corner. In the latest Big Nate collection, Nate's friends issue the ultimate insult: they point out all the ways he resembles his arch-nemesis, Gina. Nate also scores a new job as an intern at Klassic Komix, and his master plan to carpet-bomb the school with Valentine's Day cards goes seriously sideways. And when Nate gets dragged into a cringe-worthy party for the dreaded Mrs. Godfrey, what could possibly go wrong? With laughs, adventures, and jokes galore, In Your Face! will make your head spin.

Big Nate: In Your Face! 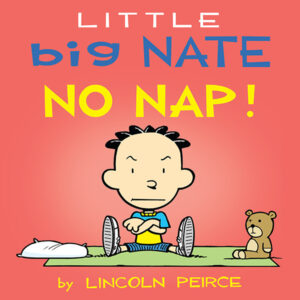 The star of the bestselling Big Nate book series is back in another board book adventure for preschool-aged children. Big Nate doesn't want to take a nap. But once he does drift off to sleep, he's delighted to find his imagination can take him to some fascinating places. The second book in the Little Big Nate series by bestselling author Lincoln Peirce is an interactive joy for young children and their parents. The thrilling next installment in the enormously popular Big Nate series You’ve got to know where you stand to survive sixth grade, and Nate Wright’s found the perfect spot: right next to Sherman, the class gerbil. Can Nate’s furry friend bail him out of his latest homework jam with Mrs. Godfrey? Or will there be a paper trail leading straight to detention? Nate has no answers, but plenty of ideas—like directing a superhero movie starring the amazing Mega-Chad, inventing a new name for his pal Francis, and living up to his reputation as a P.S. 38 Prank Day legend. Special final exam bonus question: Does Nate makes it to summer vacation? Find out in this new collection of uproarious Big Nate comics! Middle school has never been funnier! This latest Big Nate installment by bestselling author Lincoln Peirce will take readers on a hilarious, romantic, rock-and-roll adventure! Nate Wright is born to be wild! And when Enslave the Mollusk is invited to play at the P.S. 38 annual open house, he and his bandmates are on the stairway to heaven. While the kids rock, the school year rolls on. Mrs. Godfrey is back in black, Gina thinks she’s hot stuff, and Coach John is dazed and confused. The good news: Nate’s finally reunited with Trudy, his summer crush. But when he finds out she’s a—gulp—seventh grader, will Nate lose that lovin’ feeling? Middle school is a long, strange trip, and this new collection of riotous Big Nate comics just might BLOW THE ROOF OFF!

Big Nate: Blow the Roof Off! When Nate rides the Flamethrower with a mystery girl at the fair, sparks fly. Nate’s certain he’s just met the love of his life—and then she disappears! Can our lovestruck hero track her down? Sixth grade is no picnic for Nate Wright. His pal Francis won’t stop bombarding him with useless trivia. A wild pitch knocks him out of a ballgame and into the emergency room. And the only thing standing between Nate and summer school is a study session with the worst possible tutor: his too-obnoxious-for-words arch enemy, Gina. But a chance encounter on an amusement park ride could change everything. Meanwhile, the troubles are piling up in this hilarious new collection of Big Nate comics, and there may be only one thing for Nate to do: HUG IT OUT! In this brand-new collection of comics from the New York Times bestselling series Big Nate, everyone's favorite sixth-grade prankster is back for more hilarious misadventures — and even a little romance!

Big Nate: Hug It Out! 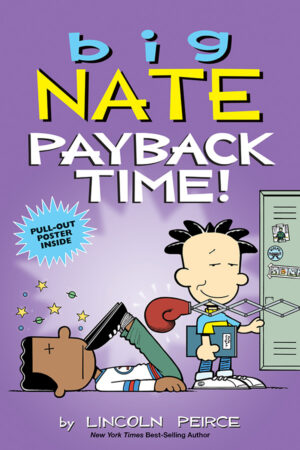 In this brand-new collection of the NEW YORK TIMES BESTSELLING series Big Nate, everyone's favorite prankster takes on everything from epic snowball fights to sixth-grade crushes, with plenty of hilarious misadventures along the way.Look out, Big Nate fans—it’s payback time! In this brand-new collection of Big Nate comics, Nate develops a mysterious allergy to Mrs. Godfrey, wages epic snowball fights with Teddy and Francis, and even takes a nervous newbie under his wing during detention. But after a disastrous run-in with Randy in the cafetorium, our hero faces a dreaded after-school showdown on the soccer field.  Will Nate survive or get kicked around?From wedgies and food fights to Halloween pranks and sixth-grade crushes, Big Nate: Payback Time! has got it all.