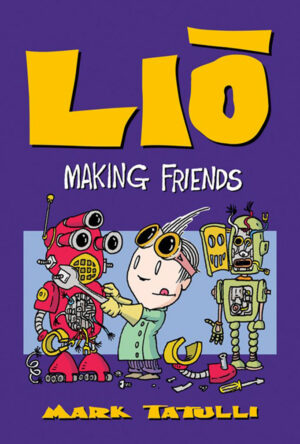 Creepy, crawly, slimy, and awesome! Welcome to the darkly detailed world of spiky-haired Lio.A curious young scientist and comic book fan, Lio is the defender of the defenseless and the inventor of a legion of zombie bunnies. Lio is joined in his day-to-day exploits by his exasperated and sleep-deprived father, a pet snake named Frank, a squid named Ishmael, and various imaginary robots and creepy, crawly monsters. Within this humorously macabre framework of sarcasm, parody, and high jinks, sidesplitting laughter abounds—all without so much as a word. For the first time, the creepy, crawly, awesome world of Lio in a kid-targeted book.The world of Lio is filled with the extraordinary—monsters under the bed, wild reptile pets, robot inventions, weird science—but it’s all commonplace for this most uncommon young man. Mark Tatulli renders this pantomime strip in pen-and-ink style, giving the artwork a dark, spidery feel to match the strip’s dark humor. Lio explores the twisted realm of a kid’s imagination—at once bizarre, creepy, and fun. Now, in this collection edited specially for kids, Lio is available to his most dedicated fans.

Lio: There's a Monster in My Socks "... Mark Tatulli's Lio isn't just a charmingly macabre strip about a creepy little boy who dabbles in the occult; it's also a daily demonstration of how a skilled artist can express sometimes complicated comedic ideas without any dialogue. . . ."— A.V. Club, The OnionLio is a small boy with a penchant for befriending squids, monsters, and aliens. He's a curious scientist, a comic-book fan, defender of the defenseless, and creator of an army of zombie bunnies. All without saying a word. Zombies Need Love Too is Lio's fifth book with AMP. 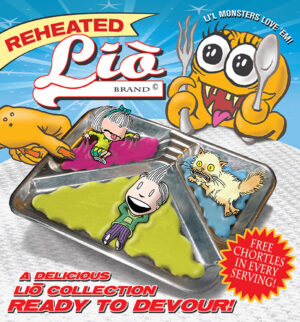 Drawn in the style of cartooning greats Gahan Wilson, Charles Addams, and 19th-century satirist A. J. Volck, Lio is a pantomime strip that tells its story without any dialogue or cartoon captions. Fans of Lio recognize the spiky-haired ghostly pale youngster as a curious scientist, a comic-book fan, the defender of the defenseless, and the creator of a legion of zombie bunnies, flanked by his creepy coterie of friends, including giant squid Ishmael and the scythe-carrying grim reaper.

Inside Reheated Lio, readers learn how Mr. Sneaky's Jokes and Gags can make archery practice more fun, along with the many uses of spiders--including their essential roles in Girl Scout cookie procurement and as a quality pizza condiment. Cozy up to your favorite Snuggied cephalopod with Reheated Lio. Emmy award-winning animator and producer Mark Tatulli’s comic strip Lió is dark, twisted, visually stunning and totally irresistible. Lió is a curios scientist, a comic-book fan, defender of the defenseless and creator of an army of robot zombie bunnies—all without saying a word.

The result of Tatulli's creativity is a mind-bending, comical, and astute journey into the darkly detailed world of spiky-haired Lio, a curious young scientist and comic book fan whose daydreams embark from the dark chasm where wit and sarcasm collide.

Defender of the defenseless and the inventor of a legion of zombie bunnies, Lio is joined in his day-to-day exploits by his exasperated and sleep-deprived father, a pet snake named Frank, a squid named Ishmael, and various imaginary robots and creepy, crawly monsters. Within this humorously macabre framework of sarcasm, parody, and high jinx, sidesplitting laughter abounds--all without so much as a word. A boy's imagination is unleashed in Lio's Astonishing Tales: From the Haunted Crypt of Unknown Horrors. The 2009 National Cartoonists Award for Best Newspaper Comic Strip, Lio is unique in its pantomime content and drawing style. This treasury includes creator commentary and origins of Lio.

It's slightly dark and terribly funny. Lio, the main character, a young boy with an imagination that has no limit, explores everything kid. From bumps in the night to things hiding under the bed, readers get an inside look at different shades of humor but always come out the other end unscathed and laughing. LIO is brilliant! In this post-Calvin and Hobbes and post-Far Side world, this is the brass ring for cool! " --Dallas Morning News

* LI O is a pantomime strip featuring a curious young boy whose daydreams embark from reality destined for the dark chasm where wit and sarcasm collide.

* In describing his strip, Tatulli explains he was eager "to bring something truly different to the comics pages . . . something to appeal to all ages, drawn in pictures only. To tell a story without text, while updating the pantomime concept with a modern audience in mind."

* The result is a mind-bendingly humorous and astute journey into the darkly detailed world of young LiO--where a spit wad can put a school bus out of commission faster than a spider can hamper the efforts of the U.S. Postal Service. This strip offers a fresh outlook and appeals to everyone . . . LIO is a comic strip that's edgy, funny, visually stunning, and truly different." --Daily Cartoonist

With a feature film in the works from producer David Kirschner (Child's Play, An American Tail), LIO deftly melds the macabre with its brand of dark humor.

Having been distinguished by Variety as "a fast riser," Mark Tatulli's morbidly mirthful pantomime comic strip, LIO, is humorously astute and just slightly askew in its perception of the world.

Centered around an odd, ghostly-pale child named LIO, and his creepy coterie of friends, including a giant squid named Ishmael and a scythe-carrying grim reaper, LIO; is influenced by cartooning greats Gahan Wilson, Charles Addams, and 19th-century satirist A. J. Volck.