Matthew Inman, Eisner Award-winning creator of The Oatmeal and #1 New York Times bestselling author of How to Tell If Your Cat Is Plotting to Kill You, presents a must-have collection of comics for cat lovers! Why My Cat Is More Impressive Than Your Baby is chockfull of comics about cats, babies, dogs, lasers, selfies, and pigeons!   This book contains a vast wealth of never-before-seen comics, including informative guides, such as: How to comfortably sleep next to your cat 10 ways to befriend a misanthropic cat How to hold a baby when you are not used to holding babies A dog’s guide to walking a human being How to cuddle like you mean it. Includes a pull-out poster of:  How to tell if your cat thinks you’re not that big of a deal.

Why My Cat Is More Impressive Than Your Baby From the Eisner Award-winning creator of The Oatmeal and #1 New York Times bestselling author of How to Tell If Your Cat Is Plotting to Kill You comes this charmingly absurd gift book about man’s best friend.In If My Dogs Were a Pair of Middle-Aged Men, Matthew Inman imagines, to hilarious effect, what life would be like if his dogs were a couple of old men running around his house. The result is a pitch-perfect gift for any dog owner.

If My Dogs Were a Pair of Middle-Aged Men Matthew Inman—Eisner Award-winning creator of The Oatmeal and #1 New York Times bestselling author of How to Tell If Your Cat Is Plotting to Kill You—serves yet another helping of thoughtful hilarity in this charming, illustrated gift book for anyone who is irked by the question: "Are you happy?"In How To Be Perfectly Unhappy, Inman explores the surprising benefits of forgetting about “happiness,” and embracing instead the meaningful activities that keep us busy and interested and fascinated.

How to Be Perfectly Unhappy Praise for #1 New York Times best-selling author Matthew Inman, AKA The Oatmeal: "All runners wonder, at some point or another, why we do what we do. Mr. Inman's explanation is the best I've ever seen. And the funniest. Because he is clinically insane." -Mark Remy, editor at large, Runner's World, author of The Runner's Rule Book "He runs. He sweats. He heaves. He hates it. He loves it. He runs so hard his toenails fall off. He asks himself, why? Why do I do this? Here, gorgeously, bravely, hilariously, is Matt's deeply honest answer." -Robert Krulwich, NPR "Finally! A voice that sings with the Blerches of angels! " -Christopher McDougall, author of Born to Run This is not just a book about running. It's a book about cupcakes. It's a book about suffering. It's a book about gluttony, vanity, bliss, electrical storms, ranch dressing, and Godzilla. It's a book about all the terrible and wonderful reasons we wake up each day and propel our bodies through rain, shine, heaven, and hell. From #1 New York Times best-selling author, Matthew Inman, AKA The Oatmeal, comes this hilarious, beautiful, poignant collection of comics and stories about running, eating, and one cartoonist's reasons for jogging across mountains until his toenails fall off. Containing over 70 pages of never-before-seen material, including "A Lazy Cartoonist's Guide to Becoming a Runner" and "The Blerch's Guide to Dieting," this book also comes with Blerch race stickers.

The Terrible and Wonderful Reasons Why I Run Long Distances Matthew Inman dishes another helping of hilarity from his online comic The Oatmeal in My Dog: The Paradox. After years of carefully observing his own dog, Rambo, Inman follows his #1 New York Times best-selling How to Tell If Your Cat Is Plotting to Kill You, with this ode to the furry, four-footed, tail-wagging bundle of love and unbridled energy frequently dubbed man’s best friend. This eponymous comic became an instant hit when it went live on The Oatmeal.com and was liked on Facebook by 700,000 fans. Now fans will have a keepsake book of this comic to give and to keep.In My Dog: The Paradox, Inman discusses the canine penchant for rolling in horse droppings, chasing large animals four times their size, and acting recklessly enthusiastic through the entirety of their impulsive, lovable lives. Hilarious and heartfelt, My Dog: The Paradox eloquently illustrates the complicated relationship between man and dog.We will never know why dogs fear hair dryers, or being baited into staring contests with cats, but as Inman explains, perhaps we love dogs so much “because their lives aren’t lengthy, logical, or deliberate, but an explosive paradox composed of fur, teeth, and enthusiasm.”

My Dog: The Paradox Why Grizzly Bears Should Wear Underpants is the second variety comic collection and fourth book from the comedic mastermind behind TheOatmeal.com, Matthew Inman. Classics from the website, including “Dear Sriracha Rooster Sauce,” “What It Means When You Say Literally,” and “What We Should Have Been Taught in Our Senior Year of High School,” are featured alongside never-before-seen works of epic hilarity that will delight veteran and newbie Oatmeal fans alike.Matthew Inman’s first collection of The Oatmeal.com spent six weeks on the New York Times bestseller list and sold 200,000 copies. This pivotal and influential comic collection titled 5 Very Good Reasons to Punch a Dolphin in the Mouth introduced Samurai sword-wielding kittens and informed us on how to tell if a velociraptor is having pre-marital sex. Matthew's cat-themed collection How to Tell If Your Cat Is Plotting to Kill You is a #1 New York Times bestseller with more than half a million copies in print. Now with Why Grizzly Bears Should Wear Underpants, Inman offers a delicious, tantalizing follow-up featuring all new material that has been posted on the site since the publication of the first book plus never-before-seen comics that have not appeared anywhere.  As with every Oatmeal collection, there is a pull-out poster at the back of the book.In this second collection of over 50 comics, you'll be treated to the hilarity of "The Crap We Put Up with Getting On and Off an Airplane," "Why Captain Higgins Is My Favorite Parasitic Flatworm," "This Is How I Feel about Buying Apps," "6 Things You Really Don't Need to Take a Photo of," and much more. Along with lambasting the latest culture crazes, Inman serves up recurrent themes such as foodstuffs, holidays, e-mail, as well as technological, news-of-the-day, and his snarky yet informative comics on grammar and usage. Online and in print, The Oatmeal delivers brilliant, irreverent comic hilarity.

Why Grizzly Bears Should Wear Underpants 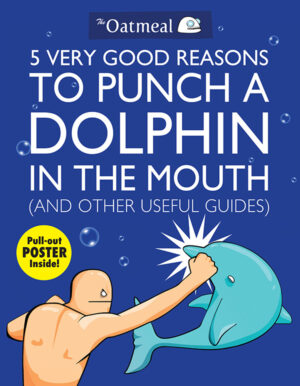 Prepare to laugh your ass off. The hilarity of TheOatmeal.com is now presented in book form with 35 never-before-seen pieces and 25 classic favorites from the Web site, including 6 Types of Crappy Hugs and 17 Things Worth Knowing about Your Cat.

In Matthew Inman's New York Times best selling 5 Very Good Reasons to Punch a Dolphin in the Mouth (And Other Useful Guides), samurai sword-wielding kittens and hamsters that love .50-caliber machine guns commingle with a cracked out Tyrannosaur that is extremely hard to potty train. Bacon is better than true love and you may awake in the middle of the night to find your nephew nibbling on your toes.

Inman creates these quirky scenes for theoatmeal.com, which launched in July 2009 and already has more than 82 million page views. In fact, every 15 to 30 seconds, someone Googles one of theoatmeal.com's creations. Now, 60 of Inman's comic illustrations and life-bending guides are presented in full-color inside 5 Very Good Reasons to Punch a Dolphin in the Mouth (And Other Useful Guides). Consider such handy advice as: 4 Reasons to Carry a Shovel at All Times, 6 Types of Crappy Hugs, 8 Ways to Tell if Your Loved One Plans to Eat You, 17 Things Worth Knowing About Your Cat, and 20 Things Worth Knowing About Beer. TheOatmeal.com’s most popular cat jokes, including “How to Pet a Kitty” and “The Bobcats,” plus 15 new and never-before-seen catthemed comics, are presented in this hilarious collection from New York Times best-selling author Matthew Inman, a.k.a. TheOatmeal.com. Includes pull-out poster!

Jesus Rollerblading Christ--another helping of TheOatmeal! Mrow, MOAR kitty comics. Mr. Oats delivers a sidesplitting serving of cat humor in his new book, How to Tell If Your Cat Is Plotting to Kill You.

If your cat is kneading you, that's not a sign of affection. Your cat is actually checking your internal organs for weakness. If your cat brings you a dead animal, this isn't a gift. It's a warning. How to Tell If Your Cat Is Plotting to Kill You is a hilarious, brilliant offering of comics, facts, and instructional guides about crazy cat behaviors from the creative wonderland at TheOatmeal.com.

How to Tell If Your Cat Is Plotting to Kill You presents fan favorites, such as "Cat vs. Internet," "How to Pet a Kitty," and "The Bobcats," plus 17 brand-new, never-before-seen cat-themed comic strips. This Oatmeal collection is a must-have for cat-lovers from Mr. Oats! A pullout poster is included at the back of the book.

How to Tell If Your Cat Is Plotting to Kill You Co-creator of the wildly popular Exploding Kittens card game and #1 New York Times best-selling author of How to Tell If Your Cat Is Plotting to Kill You, The Oatmeal, aka Matthew Inman, presents an adult coloring adventure book filled with mantis shrimp, angler fish, bear-o-dactyls, space cats, and other fantastical creatures from the wonderland of The Oatmeal.  Create your own Oatmeal masterpieces in 404 Not Found.In cozy Robot City, all robots are tucked in and accounted for, but #404 is missing. Is he searching for the city of Atlantis...or was he attacked by the shrimp known as mantis? Did he leave this worldly place...and find an evil race of cats from space? A fun, kid-friendly, safe-for-work coloring book, 404 Not Found is a magical story poem adventure to color and enjoy.  A robot dot-to-dot and hidden objects throughout round out the fun!   Relax and let your mind float as you color your way through enchanted lands with wondrous creatures from the brilliant mind of The Oatmeal.