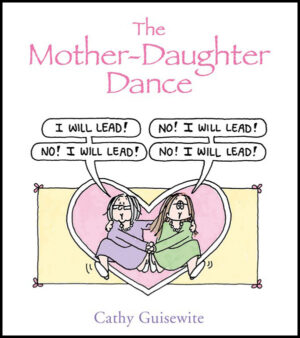 A modern Everywoman, Cathy  endeared herself to millions of fans who share her struggles with the four basic guilt groups: food, love, mother, and career. This comic page heroine blazed a trail for single working women and for her pursuit of perfection against all odds. A perfect Mother's Day gift or a great present to give Mom any day to feel special! The mother-daughter dance is a familiar waltz filled with ups and downs, twists, dips, and twirls. The only question is who’s in the lead?   The most beloved mother-daughter duo is back with a brand-new comic take on the difficult, wonderful, one-of-a-kind relationship between neurotic daughter Cathy and her caring, comforting, slightly interfering mother.   Insightful observations, amusing advice, and comical proclamations are paired with Cathy Guisewite’s distinctive illustrative style. This is an original gift book that will show your mother or daughter how glorious, complex, intense, entwined, incomprehensibly deep, and amazingly beautiful your bond truly is.    Cathy’s comics continue to be a cartoon icon and the familiar, yet fresh voice for females of all ages. Cathy's fights with food are legendary. She battles the bag of chips, the last piece of cake, the chocolate that calls her name. Now, in this delightful cookbook, the creative cartoon figure finally puts her fondness for food to work for the benefit of all womankind. It's all about Girl Food!

Co-authored by cartoonist Cathy Guisewite and food writer Barbara Albright, Girl Food dishes up recipes in ways women really think about eating. Five categories--from Romance Food to Swimsuit Food to Consolation Food--contain taste-tempting recipes for all occasions. Whether the reader's trying to woo or she's ruing the day she ever met him, Girl Food serves up just the right kind of nourishment, with a dash of Cathy's special humor.

* "Why Did I Volunteer To Bring Something" Party Pasta Salad

* "The Proposal Is Due; I Lost The File; I'm Staying Home" Chicken Soup

All of Girl Food's eighty recipes were developed by Albright, a registered dietitian, former editor-in-chief of Chocolatier Magazine, and author of numerous best-selling books on baking. Cathy--who personally tested every recipe--appears throughout the book, giving bonafide fans a chance to cook and commiserate with one of their favorite food friends. "The comic-strip character Cathy, one of America's most famous single career women, finally got married to her hapless longtime boyfriend, Irving—and on Valentine's Day, no less. It's the end of an era-or was it?"—USA Today

Rarely has one word, one positive response, resonated so loudly from the world's comic pages. But when leading lady Cathy finally took the plunge—after nearly 30 interminable years! —and accepted boyfriend Irving's marriage proposal, the occasion certainly deserved notice among Cathy fans around the globe.

The Wedding of Cathy and Irving captures all the fun, magic, and—yes—the nerve-racking overanalyzing that filled the Cathy strips leading up to the big decision and the big day itself. This collection features some of the couple's most memorable moments from throughout their long relationship, but the spotlight shines most on the year that included the unexpected "ring find," the proposal, the "YES," and the frenetic wedding plans that Cathy and Mom both endure and perpetuate.

The longest courtship in cartoon page history came to an end on February 5, 2005. But as The Wedding of Cathy and Irving shows, nothing is quite that simple in Cathy's world. Whether she's pondering pastor possibilities or worrying wedding dress selections to death, Cathy is unequalled in capturing the conundrums of modern women everywhere. It's all Cathy, through and through.

The Wedding of Cathy and Irving Written and illustrated by famous comic strip artist Cathy Guisewite, this book is a funny, touching little tribute to the unswerving influence of that tough taskmaster and best friend, of that woman who can turn pearls of wisdom into a choker — Mom. "My job isn't to revolutionize anything. My job is to give women a sense of relief, to acknowledge what they're struggling with." —Cathy Guisewite

Like women around the globe, Cathy has been constantly puzzled by her romantic relationships. From Irving to Simon to Alex, the men in Cathy's life have provided a never-ending source of confusion and amusement ever since the strip began in 1976. "If men's hair falls out," our weary heroine laments, "it's because there's nothing in there for it to hold onto."

It's no wonder, then, that cartoonist Cathy Guisewite's Cathy collection should be called Understanding the "Why" Chromosome. In this hilarious book, Cathy outdoes herself in witty revelations about men, food, Mom, and career: Cathy's four basic guilt groups. Cathy epitomizes the highs and lows felt by distaff women throughout the world.

In Understanding the "Why" Chromosome, Cathy's found a new challenge: a boyfriend who's a decade younger than she. Fitness fanatic Alex, who's sensitive and not particularly ambitious, introduces Cathy to an entirely new relationship angst, then introduces her to his hip, young mother. Cathy's baffled by the age difference, but is just as stumped when he proposes. "What's wrong with our relationship the way it is now? "she wails when Alex finally pops the question.

Cathy Guisewite is an enormously talented cartoonist who has won numerous awards for her strip and animated television shows. Her countless fans trust Cathy to constantly express the right blend of humor and observation almost as if she had x-ray vision into the human condition.

Understanding the "Why" Chromosome A Mouthful of Breath Mints and No One to Kiss Another Saturday Night of Wild and Reckless Abandon Why Do the Right Words Always Come Out of the Wrong Mouth? Cathy is for every bright thinking woman who takes 300 pounds of luggage on a two-day business trip…keeps a six-pack of candy in her briefcase…declares her independence, and then begs her mother to hem her dress-for-success outfit…and copes with modern relationships by buying more shoes.

Men Should Come with Instruction Booklets "Cathy makes us laugh at the truth and at ourselves." --Working Woman Magazine

"A new-age female with old-fashioned roots, who calls the shots but still calls home." --Success Magazine

Cathy's unique insights into the traumas and triumphs of life have earned her a place in newspapers and on the desks, refrigerators, and bulletin boards of millions of readers. Creator Cathy Guisewite says she owes her success to "hope, candy, and a willingness to embarrass myself."

A Hand to Hold, an Opinion to Reject 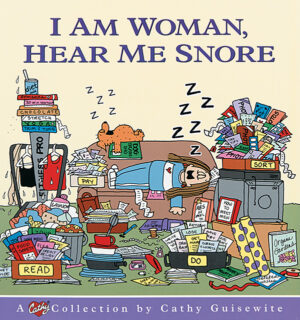 Cathy has been woman's best friend in matters of love, food, and shopping, although maybe not always in that order! Here is a collection for the frazzled modern woman who is forever plagued by the innate love of chocolate, and who is constantly in search of at least a semi-decent romance in the midst of career demands and parents who always have advice.

I Am Woman, Hear Me Snore Cathy like a longtime friend who shares the same fears and frustrations as most women: the frightening sight of too-tight swimsuits in a dressing room mirror, the relentless call of the refrigerator, and men who are never quite right. This gift book features one of Cathy's most popular subjects: Work. This is a cartoon soul mate. Readers will find comfort, solace, and lots of laughs.