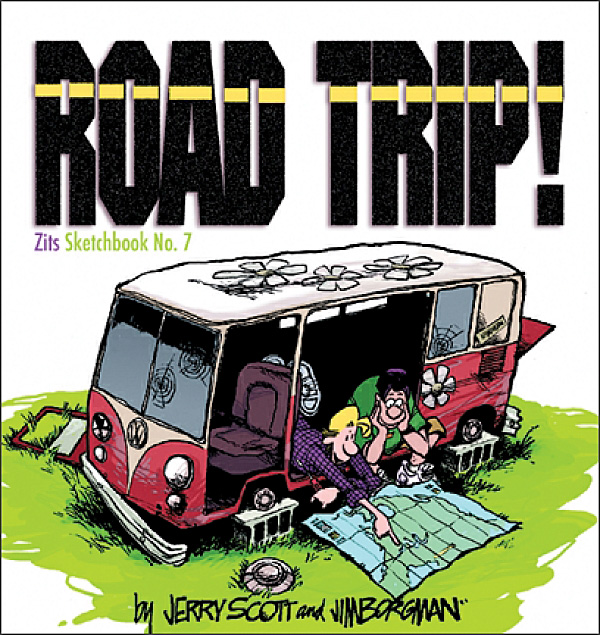 "[Zits] is one of the most visually innovative comic strips to come along in years. Borgman's graphic pyrotechnics are the perfect complement to Scott's carefully designed layouts."—Brian Walker, The Comics Since 1945The world is full of issues but none so pressing as those faced by a teenager. For proof, look no further than Zits, the timely teenage-focused strip that now appears in more than 1,100 newspapers worldwide. This two-time recipient of the National Cartoonists Society's Award for Best Newspaper Comic Strip follows the life of 15-year-old Jeremy Duncan, a kid bursting with questions, concerns, hormones, and insecurities. Cast adrift between the worlds of peer and parent, Jeremy survives by clinging to his sense of humor . . . the universal flotation device of the teenage years.

Creators Jerry Scott and Jim Borgman pull all of this eating, dating, driving, and parental angst and energy together in Road Trip! Zits Sketchbook #7. This hilarious collection contains the very popular series of strips that follows Jeremy and his best amigo, Hector, as they actually (okay, and accidentally) get to test-drive their van. Yes, that van on the cover. "MUTTS is the real thing, a comic strip that can touch, amuse and astound all at the same time."—Riverfront Times

What Now? chronicles the humorous happenings of Earl the dog and his feline friend Mooch. As usual, the endearing pair can be counted on for laughs and charming adventures. In this collection, Mooch professes his love . . . for a little pink sock.

"How can I take you seriously with a little pink sock in your mouth?" asks Earl."This from a guy who wears a 'Shnoopy' collar," retorts Mooch.

Mooch's affection for his sock is so deep, he sings little songs about it. But the love affair comes to an abrupt end when his pal Earl buries it to try to end the obsession. Fortunately for Mooch, socks come in pairs, and he's soon reunited with "its twin sister."

Earl and Mooch put their comic spin on a wide range of subjects, from napping and poetry to summer vacations and Christmas anticipations. Interspersed with its charming humor are more weighty messages on issues important to McDonnell, such as animal shelters, saving our endangered species, and other animal-protection topics.

What Now? delivers creative style and the charm of yesteryear unlike any other strip on the funny pages today.