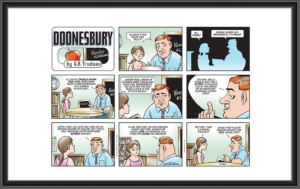 Doonesbury for 06/07/2015. The standard 4-frame comic strip is enlarged to approximately 4 x 12 inches.  Sizes vary in accordance with the size of the comic itself, but all are printed, centered, on acid-free, archival 11 x 17-inch paper. 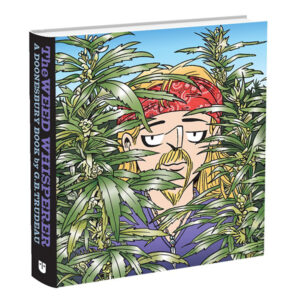 “A serious chronicle of war and a sympathetic—even moving—portrayal of the soldier’s hopeless stoicism. " — New York Times First published to little notice in 1977, Hitler Moves East is now widely regarded as a groundbreaking classic of modern photography. In this elegant, large-format limited edition, David Levinthal and Garry Trudeau’s seminal book is finally being presented at a scale that does full justice to their haunting vision of war.  As the New York Times pointed out ten years after publication, “Levinthal’s war pictures are radically new," and indeed they were.  Using cheap, molded plastic toy soldiers and tanks, art school classmates Trudeau and Levinthal conceived a fascinating new narrative form, a “paper movie,” at once deeply evocative and unabashedly fake. Combining selected archival materials with photographs of 1/35-scale toys placed in meticulously constructed miniature settings, the two artists conjured up an astonishing reimagining of World War II’s most epic campaign—the German invasion of the Soviet Union. Traveling precariously between fantasy and reality, Levinthal and Trudeau produced a work now recognized as both a sublime graphic manifesto and a powerful documentary of men at war. Doonesbury for 10/25/2015. The standard 4-frame comic strip is enlarged to approximately 4 x 12 inches.  Sizes vary in accordance with the size of the comic itself, but all are printed, centered, on acid-free, archival 11 x 17-inch paper.