The continuation of Pulitizer Prize-winning cartoonist G.B. Trudeau's bestselling Trump series, this fourth (and final?) volume chronicles Doonesbury in the time of Trumpism. Though the title doesn't mention him by name, Former Guy looms large in American politics and culture even after leaving the Executive Office of the President. This latest Doonesbury collection picks up in the heat of the 2020 presidential campaign, chronicles the infamy of the Jan. 6 Capitol riot, and continues into the next administration, the ongoing COVID-19 crisis, and the many manifestations of Trumpism in global politics and American life. Over 50 years into his legendary career, Pulitzer Prize-winning cartoonist G.B. Trudeau is still the most accomplished satirist in comics, and his ongoing comics coverage of Donald Trump are unparalleled in breadth and humor. 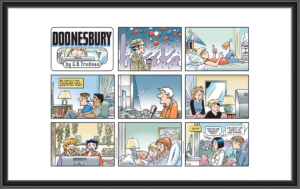 Doonesbury for 7/24/16. The standard 4-frame comic strip is enlarged to approximately 4 x 12 inches.  Sizes vary in accordance with the size of the comic itself, but all are printed, centered, on acid-free, archival 11 x 17-inch paper. No rogue regime ever needed its evildoing professionally reframed more urgently than Greater Berzerkistan, whose president-for-life Trff Bmzklfrpz (pronounced "Ptklm") needs to spin a recent round of ethnic cleansing. Fortunately, the pariah state (and its 50-hole golf course, built overnight by Kurds and Jews) borders Iran, a fact that K Street uberlobbyist Duke is retained to parlay into a major U.S. arms package.

Meanwhile, across town, the crumbling of the newspaper industry crushes Rick Redfern's hope of continuing employment. After 35 years at the Washington Post, he is ejected into the blogosphere, where his prose now battles it out with that of 1,186,783,465 rivals, including Roland Hedley, who takes the art of Twittering to a new self-reverential low.

Truly, everyone in Doonesburyland is struggling to adapt. While white Washington insiders scramble to acquire some African American friends, longtime black conservative Clyde schemes to score Obama's Blackberry number, Clinton-era Dems are forced to attend the president-elect's "No Drama School," and Jimmy Thudpucker once again reboots his career--this time as a cell phone ring-tone artist.

No one ever said change was pretty.