In this FoxTrot collection, the Fox family's offbeat vacation into the desert descends into chaos as the members of the family cope with an order (through the drive-in window) for two million cheeseburgers, a broken Nintendo, bikini shopping, and other perils of modern life. FoxTrot is a comic strip with attitude, wit and a big dose of reality. Bill Amend’s brilliant understanding of sibling rivalry and generational struggles comes to life in a refreshing blend of humor and truth.

Readers of all ages will love this glimpse into family life with the FoxTrot gang. Come and laugh with Roger and Andy, and their kids Peter, Paige and Jason.

May the Force Be with Us, Please Andy and Roger, the harassed mom and dad characters from the zany Fox household, continue their pursuit of health and happiness while raising Peter, Paige, and Jason, three energetic and rivalrous kids. Enjoy the family fun of FoxTrot!

Take Us to Your Mall What makes FoxTrot such a refreshing jolt of humor? Maybe because it seems to be written by an ingenious kid who's looking for a few good ways to get into trouble. Maybe someone just like Jason Fox himself!

In Come Closer, Roger, There's a Mosquito on Your Nose, the Fox family is in full comical force. The family's lead instigator, 10-year-old Jason, continues to contrive skirmishes involving his 14-year-old sister, Paige, but he also spends ample time with his computer and his pet iguana, Quincy.

Paige, the unwitting target of Jason's jokes, survives in style, heading off to the mall or plotting a major flirtation in cahoots with her friend, Nicole. Elder son, Peter, 16, has his own interests: cramming for a test, wooing his girlfriend, Denise, and helping his dad with a chore or two. Through it all, parents Roger and Andy strive to hold down the fort while dealing with their own challenges, from work to weight loss to the computer.

Come Closer, Roger, There's a Mosquito on Your Nose Everyone can relate to having a family member with an unusual hobby or habit. The Fox clan is no different. The youngest Fox is Jason, whose best friend is an iguana named Quincy. His sister, Paige, is a shopaholic. The oldest Fox sibling is Peter, whose stomach is a bottomless pit. But perhaps the most unusual of all is level-headed mom and official family mediator, Andy, who is working through her obsession with the movie Titanic. A slave to her emotions, she is brought to tears at a mere hint of the soundtrack and attends multiple movie screenings each day. This leaves well-meaning husband, Roger, struggling to live up to her new romantic expectations. All of this is par for the course in the hilarious but hectic Fox household.

What makes the Fox clan so entertaining? They're just like us—only funnier—with no sappy sentimentality. Readers can't help but recognize a little bit of themselves in this family strip with its good-hearted, if not eccentric, characters. The Foxes deal with everything from sibling rivalry to marital disagreements over golfing habits to sharing time on the computer, always making us laugh in the process.

FoxTrot has amassed a colossal audience of fans of all ages who eagerly turn to this hilarious strip, whether in newspapers or on the Web. New fans and loyal readers alike will enjoy I'm Flying, Jack . . . I Mean, Roger, a FoxTrot collection. Together, the Fox family provides a witty window on the realities of home life today. Whether working through the daily disorders of home, school, or office, the Fox family manages to put its special spin on the rigors of the world. Setting the comic tone are mom Andy, whose heroic efforts to make tofu into the fifth food group are legend, and dad Roger, who is a human hazard on the golf course and a threat to the workings of all technologically driven devices. Filling out the cast are the younger Foxes: the eldest and football star wanna-be Peter, shopping guru Paige, and last-but never least-Jason, the family brain trust and his trusty iguana friend, Quincy. Each sports his or her own eccentricities, from Jason's Internet stock, Jasonzonbayhoo dot com, to Peter's teeth-chattering coffee addiction to Paige's harrowing adventures in baby-sitting. "The Fox household is a nonstop, always funny, battleground; humor that hits home for anyone who's ever been part of a family." --Bookwatch

There is no doubt that the Fox family is one of the favorites of the cartoon strip world.

Through the five Foxes in FoxTrot Beyond a Doubt, cartoonist Bill Amend creates a comic peek into what family life is really like: trying. Between son Jason's elaborate schemes, daughter Paige's attempts at cooking, and son Peter's indoor football games, life is rarely dull for parents Andy and Roger Fox.

In this treasury, which is comprised of bestsellers At Least This Place Sells T-Shirts and The Return of the Lone Iguana, the Foxes find themselves again surviving an amusing round of adventure, from their summer vacation at Fun-Fun Universe, to Paige's adventures in baby-sitting, to Jason's inaugural ice-cream date. At the same time, the Foxes also face a variety of real-life situations, from thermostat wars to forced vegetarianism to Roger’s challenges with a workplace efficiency expert. All in all, this spirited family of five gives fans by the millions a daily dose of reality with a side-splitting helping of humor.

FoxTrot Beyond a Doubt 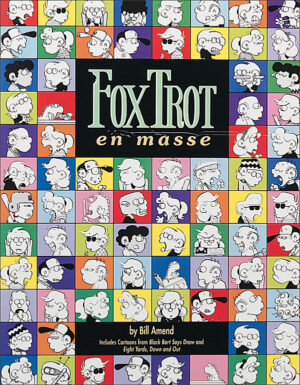 "In far too many comic strips, trendy stereotypes pass for humor, cliches pass for insight, mechanical repetition passes for story, and cut animals designed for merchandising pass for heart and warmth. FoxTrot offers welcome relief from all of this, and not a moment too soon." --Bill Watterson

This treasury edition, FoxTrot: The Works, combines two FoxTrot collections, FoxTrot and Pass the Loot. All the daily strips and color Sundays are collected in one large volume for FoxTrot fans everywhere.