Gemma Gene's adorable comics celebrate fur-parenthood and the extreme love you experience when you look into your dog’s eyes. If you are never alone when you go to the bathroom, are forced to share your food, and find your life ruled by a sassy fur ball, Living With Mochi is the perfect book for you. When architect-turned-cartoonist Gemma Gené first met her pet pug, Mochi, she felt as if time stopped. This dramatic moment and her adoring relationship with the rambunctious pug led her to begin chronicling her adventures with Mochi in a series of incredibly cute webcomics that have gained a social media following of half a million loyal readers. The comics chronicle Mochi’s life from puppyhood to adulthood, featuring Mochi's unrequited dog friendships, his jealousy of his two dog-brothers, and his love of food. Readers and dog parents will love this humorous tale of a sincerely loyal friendship between one grumpy pug and his adoring owner. If you're floundering in life, striking out in love, struggling to pay the rent, and worried about it all -- you're in luck! World Champion Worrier and Expert Insomniac Gemma Correll is here to assure you that it could be much, much worse.In her hugely popular comic drawings, Gemma Correll dispenses dubious advice and unreliable information on life as she sees it, including The Dystopian Zodiac, Reward Stickers for Grown-Ups, Palm Reading for Millennials, and a Map of the Introvert's Heart. For all you fellow agonizers, fretters, and nervous wrecks, this book is for you. Read it and weep...with laughter

The Worrier's Guide to Life Darrin Bell's Candorville is an insightful comic strip for today's world. Brutally honest but still evenhanded, Candorville takes on some of society's toughest issues, giving readers something to think about--as well as smirks, chuckles, and guffaws.

Another Stereotype Bites the Dust is a collection of creator Darrin Bell's Candorville cartoon strip. In this thought-provoking strip Bell uses a diverse group of friends to paint a real yet humorous portrait of inner-city America. An educated underachiever, Lemont Brown is an aspiring writer. Socially conscious, he wants to work at changing the world and infusing it with wisdom and justice--if only he could pay his rent. Lemont's childhood friend Susan Garcia is a book-smart and street savvy Mexican-American woman who won't let bigotry or any glass ceiling keep her down. And Lemont's friend Clyde (aka C-Dog) is a streetwise thug and undiscovered rapper who'd rather mooch off his mother than get a job.

Another Stereotype Bites the Dust deals with some tough issues--poverty, homelessness, racism, and personal responsibility--with knowing irony and incisive satire. Bell uses edgy dialogue and modern situations to jab everything from political correctness to political spinning, from political hindsight to office politics, making it a hit with the socially aware.

Another Stereotype Bites the Dust 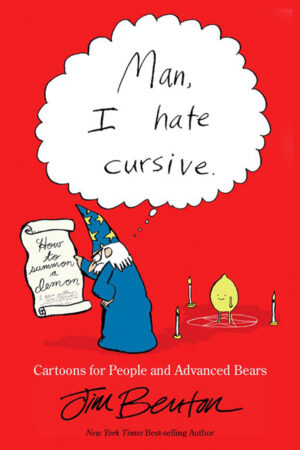 2017 Eisner Award Nominee—Best Humor PublicationNo one does comics like Jim Benton. His creativity and artistry have led to the monster success of It's Happy Bunny and Dear Dumb Diary, and his standalone strips have topped Reddit's comics section for years.Jim Benton's first cartoon collection was nominated for an Eisner. This new volume collects more of Jim's most popular strips from Reddit, shining a light on talking animals, relationships, fart jokes, and death. From whimsical to cutting, from gross to poignant, Benton's grasp of the form is on full and hilarious display.