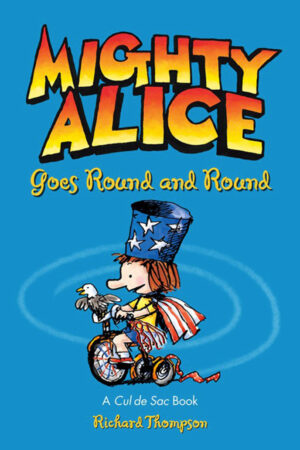 Cartoonists are passionate about Richard Thompson’s work, and Cul de Sac has been given high praise from Bill Watterson.Cul de Sac chronicles the absurdly wonderful adventures of the Otterloop family. Alice, Petey, Mom, and Dad live in the cookie-cutter suburbs not far from the interstate. Here, and at school, their day-to-day life unfolds with simple joys, tiny infractions, and wonderful moments of gentle bliss.In this specially curated collection for kids, the quirky world of Cul de Sac comes to life for a new audience."One of the five best features in any newspaper, period." -The Comics Reporter". . . (Thompson) produces one of the few strips around where nearly every individual panel is standalone delight." -The Onion A.V. Club"I can't say enough in his favor, so much is my admiration for his work." -Pat Oliphant". . . much-needed jolt of energy to the daily newspaper. We have a real talent here." -Bill Watterson (creator of Calvin and Hobbes)

Mighty Alice Goes Round and Round Richard Thompson reminds us that being a 40-year-old isn't hard, but being a four-year-old is. His warm, welcoming reminders are wonderfully lighthearted and funny as he brings home Alice's life in a fun, new Cul de Sac collection.

Alice and her Blisshaven Preschool classmates charm fans of all ages. Their adventures ring alarmingly true to parents of little ones, too. From doing projects in a whirlwind of crayons and markers to their nonstop chatter to trying to comprehend a completely incomprehensible world, Thompson's characters make Children at Play a must-read. The little boxes crammed together, the shopping malls, and the insane traffic systems set the scene for the storylines and adventures that only suburban life can provide.

"I thought the best newspaper comic strips were long gone, and I've never been happier to be wrong. Richard Thompson's Cul de Sac has it all--intelligence, gentle humor, a delightful way with words, and, most surprising of all, wonderful, wonderful drawings." --Bill Watterson, creator of Calvin and Hobbes "I hope you enjoy Cul de Sac as much as I do. I think you're in for a real treat." --Bill Watterson, creator of Calvin and Hobbes, 2008

"One of the five best features in any newspaper, period." --The Comics Reporter

"One of the few strips around where nearly every individual panel is stand-alone delight." --The Onion

"...it really seems like the inheritor of 'Calvin and Hobbes.'" --Art Spiegelman

"I can't say enough in his favor, so much is my admiration for his work." --Pat Oliphant

More than half of our nation's population resides in the 'burbs. Knowingly, Richard Thompson's Cul de Sac follows the antics of four-year-old Alice Otterloop as she navigates her way through life at Blisshaven Preschool, "the scene of [her] daily toil." Suburbanites across the nation will easily recognize the quirks and conundrums associated with house-lined streets, sidewalk canvases, and magnetified refrigerator art.

Instructed by the proper Miss Bliss, Alice regularly has issues with taking a nap, speaking out of turn, and remembering what a triangle looks like. Helping her through life's ups and downs are her eight-year-old brother Petey, Dad (a.k.a. Peter), and Mom (a.k.a. Madeline), as well as Mr. Danders, the preschool's pompously pedantic guinea pig.

This is the strip's first book collection incorporating more than a year's worth of strips dating back to the cartoon's 2007 debut. Thompson has received critical praise for doing a masterful job of commenting on social issues while entertaining in a freshly amusing and unexpected way.