This day-to-day calendar is sure to put a smile on your face with eccentric, amusing comics that will appeal to anyone who appreciates a good pun.

Each page of this daily calendar features a different color comic where Scott Hilburn endlessly reimagines history, relationships, and pop culture in bizarre and humorous ways.

6" x 5.125" page sizeEasel backer for desk or tabletop displayPrinted on FSC certified paper with soy-based inkFull-color tear-off pagesBack of pages are blank for notes or shopping listsDay/Date reference on each pageCombined weekend pagesOfficial major world holidays and observationsIncludes different color comics for each day of the week The Argyle Sweater is one of the fastest-growing syndicated comic strips in recent years. Launched online in 2007, it quickly was picked up by 130 newspapers all over the country, including the New York Daily News, the Washington Post,the Los Angeles Times, the Detroit Free Press, the Seattle Times, and the Portland Oregonian, as well as a host of online sites.

Since launching as an online feature in 2006, The Argyle Sweater has cemented its reputation as the comic strip for fans of absurd, clever humor. Now, cartoonist Scott Hilburn has collected the best of his 2009 strips in 50% Wool, 50% Asinine.

Coming from The Argyle Sweater's customary skewed perspective, the comic strips collected in 50% Wool, 50% Asinine will delight readers with the puns (both verbal and visual) and cerebral wit that are the hallmarks of this hilarious strip.

A true fan favorite, The Argyle Sweater has gathered a loyal and enthusiastic following with origins that even predate its hugely successful launch with Universal Press Syndicate. Funny, irreverent, smart, and entertaining, 50% Wool, 50% Asinine is perfect for devoted fans of the strip and a great introduction for those lucky enough to get to experience for the first time this intelligent comic strip infused with childlike imagination. 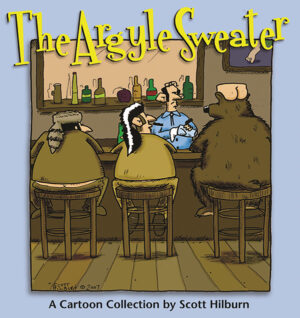 The Argyle Sweater is a comic for grown-ups but it's inspired by a childlike imagination and charm. Follow bears, bees, chickens, wolves, dogs, cats, zebras, cops, game shows, phones, cavemen, and even nursery rhyme icons and an evil scientist, into the mischief and perfect-fitting dialogue of The Argyle Sweater world.

Hilburn jokes he thought about naming the strip For Better or For Worse but noted "that that one was already taken." It's been said politics makes for strange bedfellows. In this case, those fellows just happen to be furry. In Dog vs. Cat: A Nation Divided, cartoonist Don Asmussen creates a fun and fluffy mix of politics and pets that's outside the box. The litter box, that is.

It has become ever apparent in recent years that divisiveness is poisoning our national debate. Discussion and compromise have been replaced by name-calling, bullying, and veiled hate speech. Never in our history has our country been so fractured between these two groups . . . dog lovers and cat lovers.

Using metaphors from the political scene of both yesterday and today, Dog vs. Cat humorously parodies government silliness and squabbles through the eyes of a cartoon canine and kitty. Humorist Don Asmussen takes us behind the scenes for an investigative look at the controversial Spot vs. Mittens election-one that nearly scratched and clawed our country apart. The media gets accused of cat bias in its coverage of Mittens's affair with JenniPURR Flowers. Meanwhile, Spot's dog license is called into question at the Cat National Convention.

Perfect for the pet owner who keeps an eye on the political arena, Dog vs. Cat scoops the stories-and then the yard-of all the funny, quirky things that cat lovers, dog lovers, and elected humans can do, all in the name of creating a pet-ter tomorrow.

Dog vs. Cat: A Nation Divided