So far this century, there have arguably been three breakout hits on the comics page-The Boondocks, Get Fuzzy, and Pearls Before Swine." -San Francisco Chronicle

* Get Fuzzy was named Best Comic Strip of the Year in 2002 by the National Cartoonists Society and now appears in more than 500 newspapers worldwide.

Satchel, the ever-hapless Shar-pei-Lab mix in the Get Fuzzy gang, is the star of I'm Ready for My Movie Contract: A Get Fuzzy Collection, inspired by his hero, Wonder Mutt. Rounding out this not-so-warm-and-fuzzy cast is Rob Wilco, a single, mild-mannered ad exec, and Bucky Katt, a highly strung, bucktoothed, laid-back-eared Siamese with an eye for mischief, an obsession with monkey pizza, and a neurotic fear of beavers. Together they form one crazy troupe for fun and mayhem.

I'm Ready for My Movie Contract On the Media calls Darby Conley "the most successful cartoonist of the new generation." --National Public Radio

Loserpalooza is Darby Conley's latest look at the interspecies antics of his wildly popular characters Bucky, Satchel, and Rob. At the center of this not-so-warm-and-fuzzy arrangement is Rob Wilco, a single, mild-mannered ad exec. Bucky is Rob's temperamental, buck-toothed Siamese cat with a penchant for mischief, a hatred of ferrets, and a love of rubber bands. Satchel is a sweet but naive shar-pei-yellow-Lab mix who haplessly ends up on the receiving end of Bucky's wayward schemes. An entertaining critique on popular culture and a bona fide hit, Get Fuzzy was named Best Comic Strip of the year in 2002 by the National Cartoonists Society and now appears in more than 400 newspapers worldwide. 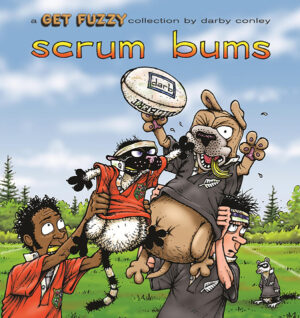 Bucky, Satchel, and Rob are back for more madness and mayhem in Scrum Bums. And the world couldn't be happier! Darby Conley's previous titles include two New York Times best-sellers.Bucky Katt is a rather obstinate Siamese who constantly battles his "owner" Rob for control of their home. Satchel Pooch, the Labrador-Shar-pei mix who's sweet and lovable, makes a nice lackey for Bucky. Bucky knows he's smarter than everyone else; it's just a matter of convincing the rest of the world. Satchel always tries to do the right thing but very often ends up the brunt of Bucky's antics. Rob Wilco is a bachelor trying to regain household domesticity. Together, this seemingly typical threesome gets into some less-than-typical but hilarious situations. There's never a dull moment at the Wilco residence.

Get Fuzzy, featured in over 500 newspapers worldwide, is one of the most highly lauded cartoons in the country. The National Cartoonists Society named it Best Comic Strip of 2002. Its sidesplitting humor and hilariously illustrated facial nuances appeal to animal lovers everywhere. Bucky and Satchel's words and expressions are what we all picture our beloved pets saying and doing. Get Fuzzy makes the fur fly. This freshly amusing strip is a darling among readers who enjoy pets with an attitude. This wry cartoon features Rob Wilco, a mild-mannered ad guy who's guardian to two rambunctious pets: Bucky, a temperamental cat who carries a boom box and goes on spending sprees, and Satchel, a gentle canine who tries to remain neutral even when he bears the brunt of Bucky's mischief. Together, this unlikely trio hangs out together, watching TV, cooking for friends, and attempting the occasional adventure outside. Anyone who has a pet or even knows one will find this Get Fuzzy collection, The Dog is Not a Toy, an astutely witty take on relationships between the species.

The Dog Is Not a Toy 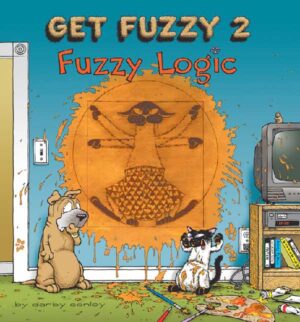 Cats are famous for being aloof, but "cat-titude" reaches new heights in Get Fuzzy, the bitingly funny comic strip from cartoonist Darby Conley. Wry and witty, Get Fuzzy is a hilarious portrait of single life with pets. Rob Wilco is the human who heads the household, but it's really Bucky the cat who's in charge. Satchel, the gentle pooch with a sensitive soul who tries to remain neutral, frequently ends up on the receiving end of Bucky's mischief. Together, this trio makes it through the trials and tribulations of daily life as an unlikely team. Darby Conley's Fuzzy Logic will hit the funny bone of everyone who enjoys their pets with an attitude. Dogs and cats can be cute, cuddly, and faithful companions. They also can be ornery, unpredictable, and hilarious. Get Fuzzy is all about the latter. In this collection, New York Times best-selling author Darby Conley has found uncommon humor and insight in our common, everyday pets.

Get Fuzzy has become one of the premier comics on the funny pages. The Wilco household includes Rob the bachelor, Bucky, the cantankerous cat with an attitude, and Satchel, the loveable-but-clueless dog. If animals really could talk, one would expect them to sound like Bucky and Fuzzy. Often, it's the subtle nuances of the strip-from Bucky's hilarious facial expressions to Satchel's dopey innocence-that pack the biggest laughs.

The strip's dry wit and razor-sharp reality earned it the National Cartoonists Society's prestigious Best Newspaper Comic Strip in 2002. Get Fuzzy captures the non-glamorous essence of being a pet owner in a way people who own and operate dogs and cats are sure to love.

You have to wonder what kind of pets cartoonist Darby Conley had as a child. If they were anything like Bucky Katt and Satchel Pooch. . . well, life in the Conley house must have been interesting to say the least. The wacky triumvirate of Bucky, Satchel, and Rob are back in this Get Fuzzy collection,

Rob Wilco is the mild-mannered ad executive caretaker of Bucky and Satchel. Satchel is a sweet and naïve shar-pei-yellow-Lab cross, while Bucky is a Siamese with "cat-titude" to spare. Bucky and Satchel get along like, well, like cats and dogs. Like a beleaguered parent, Rob constantly must thwart Bucky's schemes and protect the unsuspecting Satchel. His pets' mischief continually disrupts his attempts to meet women. You try explaining to your date why your cat thinks he's a gangsta rapper and your dog is filming his ";crib" for MTV. Would anyone live with humans who behaved like this?

Bitingly funny with a wry sense of the absurdity of life with pets, Get Fuzzy appeals to everyone who has ever lived in a mixed-species household.

"The humor is a wickedly authentic blend of young-professional-bachelor shtick and pets-from-hell high jinks. . . . And, perhaps best of all, the strip keeps getting better." Indeed, Get Fuzzy has rocketed to the top of the list of syndicated newspaper strips. It now appears in 250 newspapers, including the Los Angeles Times, San Francisco Examiner, Chicago Tribune, Boston Globe, Detroit Free Press, Philadelphia Inquirer, and Seattle Times. Readers can't get enough of the goofy trio that populate this hilarious strip: Rob Wilco, the single, mild-mannered advertising executive, and his two rambunctious pets, Bucky, the sharp-fanged, self-absorbed cat, and Satchel, the easygoing mixed-breed dog who ends up on the receiving end of Bucky's mischief. The combination creates Get Fuzzy's astutely witty take on relationships between the species.

Now, in a size and format that's perfect for die-hard fans and those looking for the perfect gift, I Would Have Bought You a Cat, But . . . will become the must-have little treasure for everyone who craves a bit more of the trademark Get Fuzzy foolishness, or just enjoys a good chuckle.